When it came to beer, Rob Gilmour and Kevin O’Donnell were like kids in an Arcade. Despite clocking up over thirteen years in the industry together, Kevin as the editor of a beer magazine, Rob as a product buyer for a beer retailer, they always classified craft beer as ‘play’ rather than ‘work’.

To say beer was always on their brains would be an understatement. Lunch breaks in the office, evenings in the pub, text messages at the weekend were all dedicated to the stuff. Whenever they got together, conversations inevitably circled back to beer; what they liked, what they didn’t, who had the best cans and, most importantly, who was making the best-tasting beers. After years of talking about it, reading about it, writing about it, and (naturally) drinking it, they finally got to thinking: we know everything there is to know about good beer, so why don’t we make it?

And so, Arcade Beerworks was born. 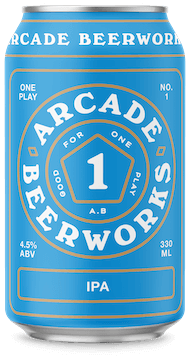 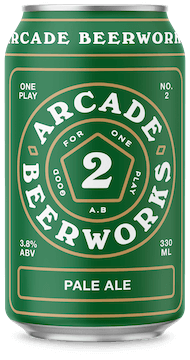 Thirst quenching with its subtle flavours, this Pale Ale has a light citrus aroma, flavours of orange and biscuity malt, all wrapped up in a long, delicately bitter finish.
Buy now

A fruity session beer, this Citrus Pale Ale is a classic fusion of finely balanced pale ale, with its delicate fruity aroma and biscuity flavours, sparked to life with added citrus.
Buy now

A New England Session IPA that is bursting with tropical fruit aroma and stone fruit flavour; its characteristic haze, full body and punchy flavours give it the wow factor.
Buy now